“When you hit a wall, just kick it in”

O Patti  – you are the opposite of me and the sum total of who I could have been had I but dared to venture.  Watching you live your life with passion and intent,  tracking the path it takes you  – without question, content in your own skin  – I know this way freedom lies.  The power of intent. Reading your words this week reminds me of the power of intent that you intended your life to be this: be what you want to be, do what you want to do and never ever look back and when you hit a wall, just kick it in!

That the book opens with the death of her friend and lover, the photographer and Robert Mapplethorpe with whom this early life journey was shared  – I found  profoundly moving – a memento mori.   Cold in the earth  – but Patti brings him so much to life in these pages  – we forget the end as we read of the bond these two artists shared that would support and carry each other to unexpected international success.

Set in the late 1960s and early 1970s, Patti name drops like a trooper but somehow it never matters  – it is all part of the true cool – dom of growing up in the heady, starry days of the Chelsea Hotel.  Patti writes as the observer, witnessing the events much like Joyce Johnson writes in her book Minor characters yet this is different as Patti went on to create her own fame and own talent to huge international effect as a singer, songwriter and poetess  – this is where it all began:  loving each other, holding each other and birthing each other into success.  Unconditional. 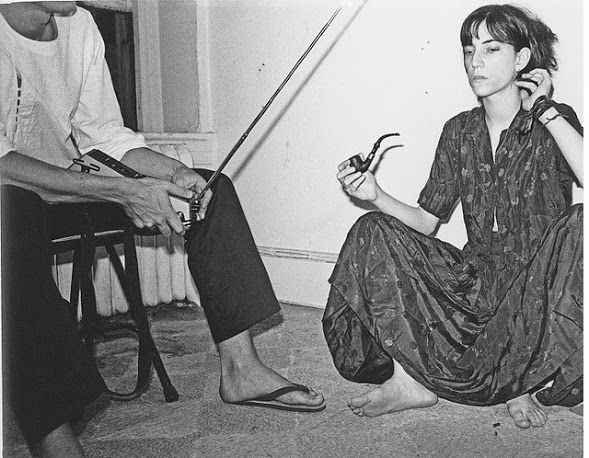 Patti writes like a cabinet of curios and trinkets  – of coloured glass and shiny beads and talismans Robert and she brought for each other scouring second hand markets, flea shops and pawn brokers for inspiration and encouragement.  Each piece brought out  and held up to sunlight to experience and radiate and shine.  I love to read of each small trinket a gift exchanged between them and the sentiment behind them.  I love too to  read of Patti’s omen check for a good day for an event to occur (Rimbaud’s birthday to move house for example and my own favourite: finding a pair of alligator shoes discarded aglow on the side walk – Patti writes:

“The night of the shoes as we came to call it was for Robert a sign that we were on the right path, even as so many paths crossed each other”

It made me laugh out loud with delight to recognise that I am not the only one who lives like that and you , how about you  – do you live by omens and auspicious signs too? 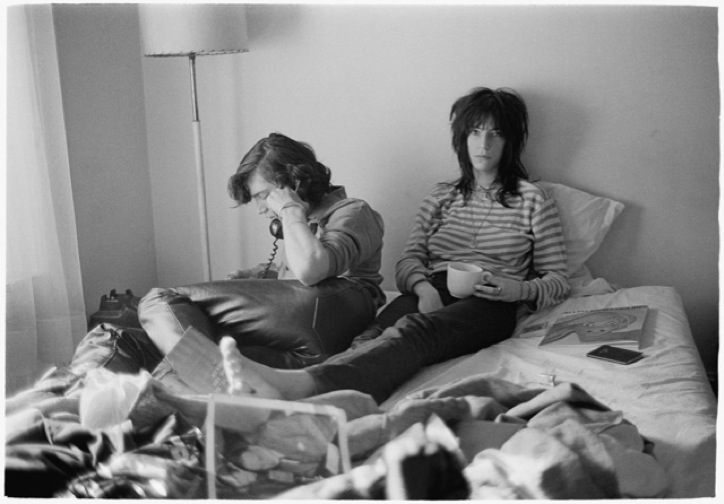 And some of the tales Patti shares are also extraordinary to me.  Writing of leaving home to sleep alone on park benches, Patti wanders the streets homeless at 17, 18, sleeping in doorways not compromising, looking for her authentic self as she journey’s forth in her own faith and ability and potential  – this is is solid and inspiring.   I look back and wonder what happened to my soul, to me at 18.   I was so lost at that age.  Adrift, lose at the edges, unformed but in such a different way to Patti where her unformed spirit prepared to enter the dance, her feet propelled by the power of intent, my own was frightened and cosmically adrift.  I gave up.  Destiny was in Patti’ s  heart all along and Patti never flinched – so maybe destiny is in all our hearts and simply it takes some longer to find it? May be some do flinch with every punch but learn over time to keep going, to follow the path to creativity, lifted up and inspired by those who carry the lamp ahead.  Where we can both find common ground is in the mysterious higher power of lucky which intervenes on  numerous fortuitous occasions in Patti’s journey and offers her choice.  Like when she leaves home that first time and finds herself without enough money for the ticket out.  Wandering the streets behind the station she finds a purse with money in it and decides this was a gift from the Gods although carefully taking the money and returning the purse to the station for someone else to re-claim whatever your morality on this one we can all agree on the timing and the prescience of some higher power of lucky in her life.  How does this show up for you?  Do you have the magical eyes too? 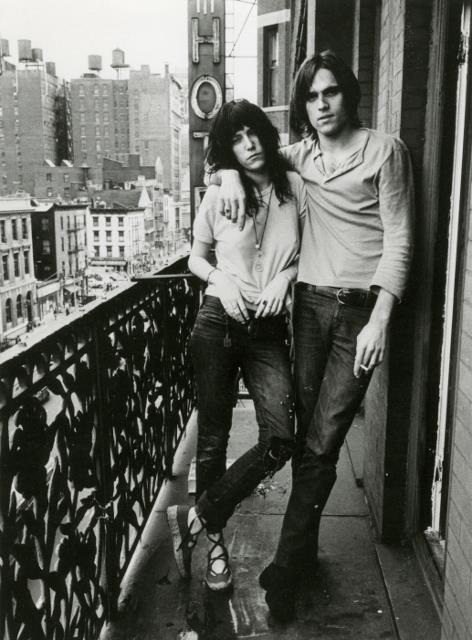 See, fortune favours the brave – specially those wearing espadrilles of such fabulous- ness as these in 1972. What I see is where authenticity meets the power  of intent and it literally blows me away.  This way freedom lies and Patti rode it all the way.  Patti offers one huge sign post out for those looking and with the eyes to see. For those who seek stories of the Chelsea Hotel of the crazy pie-eyed world of hopefuls in early 1970 s USA of Robert Mapplethorpe and the path of bohemian indulgence  or simply a tale of faith and in friendship and one woman’s journey into fame then this one is for you.  Go Patti.

This beautiful eulogy poem to Robert – “Reflecting Robert” is read by Ms Smith in this extract from the Coral Sea on sound cloud with the words of the poem printed below.  Hit the play button and breathe in the love – its all yours Patti.

“Reflecting Robert” from the coral sea by Patti Smith

Blessedness is within us all
It lies upon the long scaffold
Patrols the vaporous hall
In our pursuits, though still, we venture forth
Hoping to grasp a handful of cloud and return
Unscathed, cloud in hand. We encounter
Space, fist, violin, or this — an immaculate face
Of a boy, somewhat wild, smiling in the sun.
He raises his hand, as if in carefree salute
Shading eyes that contain the thread of God.
Soon they will gather power, disenchantment
They will reflect enlightenment, agony
They will reveal the process of love
They will, in an hour alone, shed tears.
His mouth a circlet, a baptismal font
Opening wide as the lips of a damsel
Sounding the dizzying extremes.
The relativity of vein, the hip of unrest
For the sake of wing there is shoulder.
For symmetry there is blade.
He kneels, humiliates, he pierces her side.
Offering spleen to the wolves of the forest.
He races across the tiles, the human board.
Virility, coquetry all a game — well played.
Immersed in luminous disgrace, he lifts
As a slave, a nymph, a fabulous hood
As a rose, a thief of life, he will parade
Nude crowned with leaves, immortal.
He will sing of the body, his truth
He will increase the shining neck
Pluck airs toward our delight
Of the waning
The blossoming
The violent charade
But who will sing of him?
Who will sing of his blessedness?
The blameless eye, the radiant grin
For he, his own messenger, is gone
He has leapt through the orphic glass
To wander eternally
In search of perfection
His blue ankles tattooed with stars.

Check out this early archive of Patti Smith poetry reading